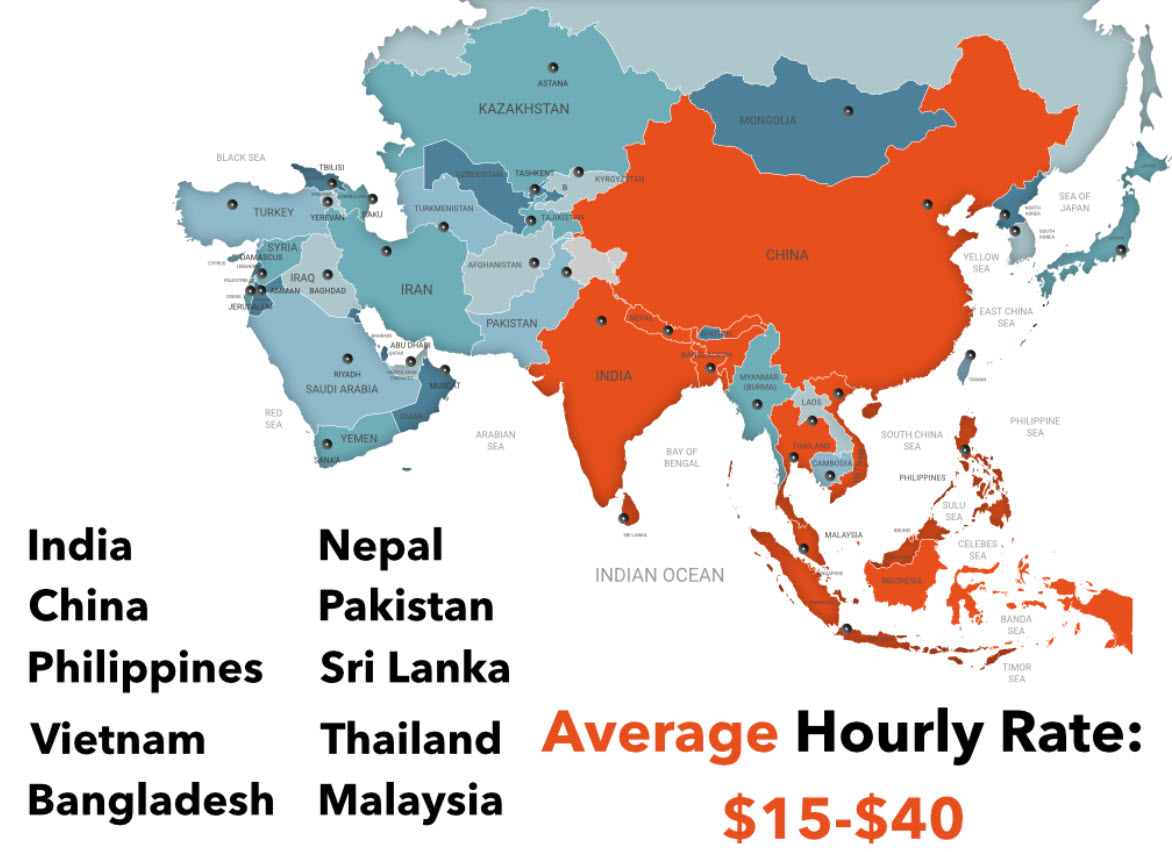 Current State of the IT Hiring Market

According to a recent study, US-based startups hire senior software engineers. It is uncommon to locate a job opportunity for a junior or even a middle-level role. Many factors can contribute to this, including the need for startups to perform quickly to survive in a changing environment, the need for strong leaders in each role, limited resources that make hiring and managing a large dev team impossible, or even the opposite receiving funding rounds that open new horizons.

A similar scenario may be found in Western Europe (mainly Germany and the Netherlands), concentrated in many European startups.

Due to high demand and a limited supply of senior engineers in these locations, wages have risen, fierce competition for available resources has risen. Although large corporations can afford to pay the highest fees and win this race, most startups seek talent in nations with lower living costs. This is how Eastern Europe, Latin America, Asia, and Africa came to be characterized as offshore software development hotspots.

Last year, however, the entire globe descended into a new, pandemic-related digital era marked by rapid technological innovation. Together with the ever-increasing tech trend over the last few years, it resulted in a massive growth in demand for software development services.

Even in the offshore outsourcing locations, talent was scarce. Finding an engineer with a suitable tech stack and 5-8 years of experience is increasingly difficult. As a result, pay for offshore software engineers have reached dizzying heights.

*According to The World Bank, the max score is 100

Based on offshore software developer rates by country, we can identify two main pools of outsourcing destinations:

Countries with high-quality of life and rising costs of living

This group includes the United States, Australia, Western Europe, Israel, the United Arab Emirates, and others. They are distinguished by strong offshore development rates combined with good living and working conditions. The development charges in this area range from $50 to $150.

Latin America, Africa, Asia, and Eastern Europe are among them. They are frequently distinguished by lower offshore development rates, with expenses ranging between $20 and $50.

When recruiting a development team in Eastern Europe, there are many options, with around 1 million software experts to choose from. Ukraine, Poland, Romania, and Belarus are its key outsourcing centers, with typical offshore development charges ranging from $20 to $50.

Eastern Europe, rich in technical educational institutions, has good software specialists who are only becoming better, so everyone wants to get their hands on them. Another advantage is their excellent English abilities, which are essential for any successful project.

Let’s take a look at outsourcing rates by country below.

Ukraine stands out as a favorite software development offshore supplier because of its school system, which produces over 36,000 IT workers yearly. It’s no surprise that Ukraine is a hotspot for tech startups.

With a large pool of IT professionals (over 90,000), it is up to you to select your chosen software development partners based on the skill set necessary. They have lower prices ($30-$50 per hour depending on the city) than their U.S. and Canadian colleagues ($100), and their time zone is the same as most Western European nations, not the U.S. Therefore, jobs assigned in the evening here are worked on in the morning in Ukraine.

Poland’s outsourcing development rates are slightly higher than in neighboring Ukraine, although they are still in the $40 – $55 range for Eastern Europe. However, the country’s excellent technical education and better living standards can account cost of offshore software development per hour more significant. Polish outsourcing is rich in freelance professionals and established enterprises.

When selecting a country to hire a remote development team, you should also examine the IT outsourcing market in Latin America. It provides competitive personnel, reasonable pricing, and an accessible outsourcing location.

So what is the price? A junior specialist’s hour may cost approximately $40, while a senior developer’s hour could cost around $55, which is a reasonable fee to ask for.

Latin America has only lately been acknowledged as an software development offshore hub, owing to the local government’s efforts, in addition to all of the economic uncertainty and political unrest. Countries such as Argentina, Colombia, and Brazil need new funding methods and providing for their citizens, and IT delivered positive outcomes.

Argentina is one of Latin America’s most advanced IT outsourcing marketplaces. It provides a large pool of technically competent personnel well-known in Western Europe. Growing economically and culturally close to European countries, Argentina has established a significant global IT arena. Offshore developers in this city range from $30 for a junior developer to $50 for a senior one.

In Brazil, the typical developer hourly wage is between $30 and $50. The country is one of the world’s foremost IT outsourcing centers. Brazil was ranked 15th in the top 50 IT nations by Tholons Services Globalization Index in 2021. This region is also known for producing a large number of technical engineers. Brazil produces around 15,000 tech graduates and closes to 500 thousand engineering offshore software developers each year.

This region’s most significant competitive advantage is its inexpensive offshore software development rates, varying from $20 to $45. Asia has many tech talents to offer with its 10 million IT expertise.

However, low offshore rates for software development and a diverse labor pool are frequently at the expense of product quality and significant cultural and temporal gaps. China, India, Vietnam, Malaysia, Indonesia, the Philippines are Asia’s largest outsourcing centers.

By 2020, Vietnam targets to enter the top 10 suppliers of software outsourcing and digital content globally with around one million workers in the field of information and technology. The average developer salaries in Vietnam are approximately 85% lower than those in the United States, resulting in significant savings on your part. The typical offshore software development cost in Vietnam is $20 to $50.

The Vietnamese IT outsourcing market is still in its early stages, but it is rapidly expanding: Vietnam has already surpassed Japan as the country’s second-largest IT outsourcing partner. By 2020, TopDev, a famous IT recruitment platform in Vietnam, expects to have 300,000 developer profiles registered.

Vietnam ranks fifth in the GSLI due to its meager labor rates, which compete with India’s, and favorable IT tax regulations. Vietnam is distinguished by high levels of competence, many technical professionals, and enough language skills.

India is often regarded as one of the most cost-effective offshore software development destinations. Its offshore developer charges typically vary between $20 and $40. People widely use English throughout the country, which significantly benefits when selecting a location to outsource software development.

However, the quality of the finished product might be a concern. Because there is no legislative structure to oversee quality standards in the nation, it is entirely dependent on your luck in finding trustworthy and reliable developers.

The region has a vast talent pool of competent developers. Software developer cost by country China is somewhat more per hour than in other Asian nations: from $30 to 50. This cost results from a more sophisticated local economy and skilled specialists who are susceptible to custom software development charges.

One of the primary worries for firms considering outsourcing to China is the language barrier. As a result of recognizing the country’s low English proficiency, the Chinese government began to engage in various projects to educate the local populace.

The country’s developers have a decent English language, a solid technological basis, and a well-developed IT infrastructure. Furthermore, its stable political and economic status contributes to its attractiveness among IT outsourcing aspirants.

Until recently, Africa was not a favored offshore development location. Following Microsoft’s investment of $100 million in the continent’s developers in 2019, the African IT outsourcing business began to expand significantly. Kenya, South Africa, Morocco, Egypt, and Nigeria are important IT centers. Rates often range from $20 to $45.

South Africa is the continent’s IT sector leader. In 2021, the country was ranked 20th among the top 50 digital nations. South Africa’s time zones coincide with central European countries, which helps the region’s burgeoning IT business.

In addition to South Africa, the northern section of the continent shares time zones with most European countries. Offshore developer rates in this region are consistent with the rest of the continent. Morocco and Egypt are essential IT outsourcing nations. Some of the world’s largest telecommunications companies have even established R&D facilities in Egypt (Vodafone, Intel, etc.).

Kenya is the largest IT outsourcing center in Eastern Africa. One of the benefits for this country is the high level of English proficiency among developers. This is due to the country’s laws, which established English as an official language in Kenya.

Nigeria is the best region in West Africa for offshore development. The country’s IT sector is still developing, but it has a lot of promise and skill. The Nigerian government aggressively invests in market development and developer education, recognizing the benefits of a well-developed domestic IT industry. Due to time zone differences, it may be challenging to plan meetings and support their clients.

Average offshore software development rates by these countries might range from $50 to $150. These figures result from well-developed economies, high life-quality standards, and well-developed internal marketplaces in the selected locations.

So when offshore software development rates comparison, which country has the highest outsourcing rate?

The United States is consistently ranked among the top digitally competitive countries globally. Nonetheless, the region’s national market, economy, and taxation structure make it one of the most costly IT outsourcing locations. In the United States, average fees for offshore software development may range from $60 to $130.

The high rates in this region can be explained by the stable economy, advanced taxation system, and high living standards of European nations. Offshore developer rates in Germany, France, and the Netherlands vary from $50 to $100. However, the same services in Switzerland or Scandinavia may cost you up to $100-$200.

Right now, the Australian IT market is expanding quickly. However, it has considerable challenges in becoming one of the top offshore development centers, including exorbitant rates, a remote location, and a substantial time difference. In Australia, average fees for software development might range from $100 to $150.

Israel has a high pace of software creation. Let’s compare: the typical income of an offshore software development team member in Ukraine is around $3,000, but a specialized junior in Israel will earn $5,500 per month for the same task. Such stark discrepancies stem from the country’s lack of technical competence and, of course, Israel’s more stable economic status.

If you want to build a professional offshore software development team in Vietnam, look no further than TIGO Software Solutions.

We provide offshore software development services to help clients increase their software development capacity and efficiently turn their ideas into working products. A dedicated Development Team of experienced engineers is to design and develop high-quality technical solutions of any level of complexity.

Our offshore software development rates are from $1,800 to $3,000 per month depends on the position that you need.

Why do the offshore rates for software development differ?

Offshore software development is advantageous in a variety of ways:

Hiring a software development team for your project might be a difficult undertaking. This is especially true if you are situated in the US or Western Europe and are seeking tech talent in your region. It may take you a long time to find ideal people at reasonable pricing.

You may, however, engage an offshore programming team to expedite the process and minimize unanticipated costs. If you are new to hiring remotely, offshore software development rates by country can be a factor to consider.

Reach out today, and we’ll be happy to provide you with more insights into the management of outsourced development.