What is Bug Convergence? Why is it important for User Acceptance Testing (UAT)? 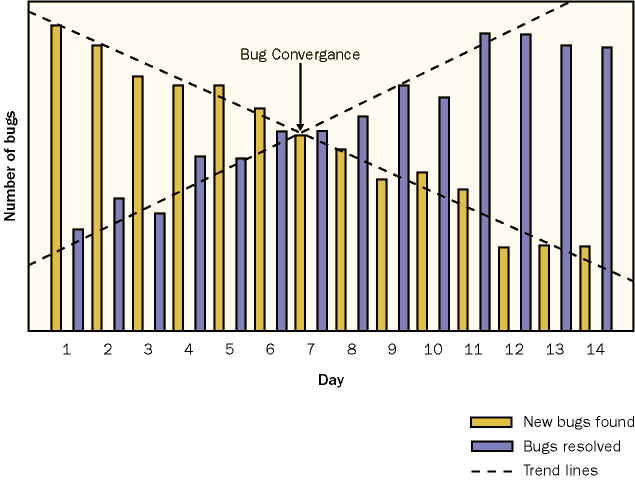 Bug convergence is a milestone in the stabilizing phase of a project life cycle. It is a point at which the new bug rate (found during an application testing) drops below the bug resolution rate. At this point, the rate of bugs resolved exceeds the rate of new bugs found during application testing. Therefore, the actual number of active bugs decreases as the number of bugs resolved increases. After bug convergence, it is important that the number of bugs decreases until zero bug bounce (another milestone).

Because the bug rate will still go up and downâ€”even after it starts its overall declineâ€”bug convergence usually manifests itself as a trend rather than a fixed point in time.

After bug convergence, the number of bugs should continue to decrease until zero-bug release. Bug convergence tells the team that the end is actually within reach.

Bug Convergence and Zero Bug Bounce is the point in the project when development finally catches up to testing and there are no active bugsâ€”for the moment. Figure 11 illustrates a zero-bug bounce. After zero-bug bounce, the bug peaks should become noticeably smaller and should continue to decrease until the solution is stable enough for the team to build the first release candidate.

Careful bug triaging is vital because every bug that is fixed risks the creation of a new bug. Achieving zero-bug bounce is a clear sign that the team is in the endgame as it drives to a stable release candidate.

Note that new bugs will certainly be found after this milestone is reached. However, zero-bug bounce marks the first time when the team can honestly report that that there are no active bugsâ€”even if it is only for the momentâ€”and it focuses the team on working to stay at that point. 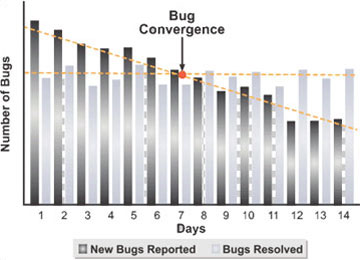 Other features of a release candidate are:

The pre-production test complete interim milestone is not complete until the team ensures that everything developed to deploy the solution is fully tested and ready.

User acceptance testing and usability studies begin during the development phase and continue during stabilization. These are conducted to ensure that the new system is able to successfully meet user and business needs. This is not to be confused with customer acceptance, which occurs at the end of the project.

When this milestone has been achieved, users have tested and accepted the release in a non-production environment and verified that the system integrates with existing business applications and the IT production environment. The rollout and backout procedures should also be confirmed during this period.

Upon approval of release management, software developed in-house and any purchased applications are migrated from secure storage to a pristine archive location. In MOF, this is known as the Definitive Software Library (DSL).

Release management is responsible for building releases (assembling the release components) in the test environment from the applications stored in the DSL.

User acceptance testing gives support personnel and users the opportunity to understand and practice the new technology through hands-on training. The process helps to identify areas where users have trouble understanding, learning, and using the solution. Release testing also gives release management the opportunity to identify issues that could prevent successful implementation.