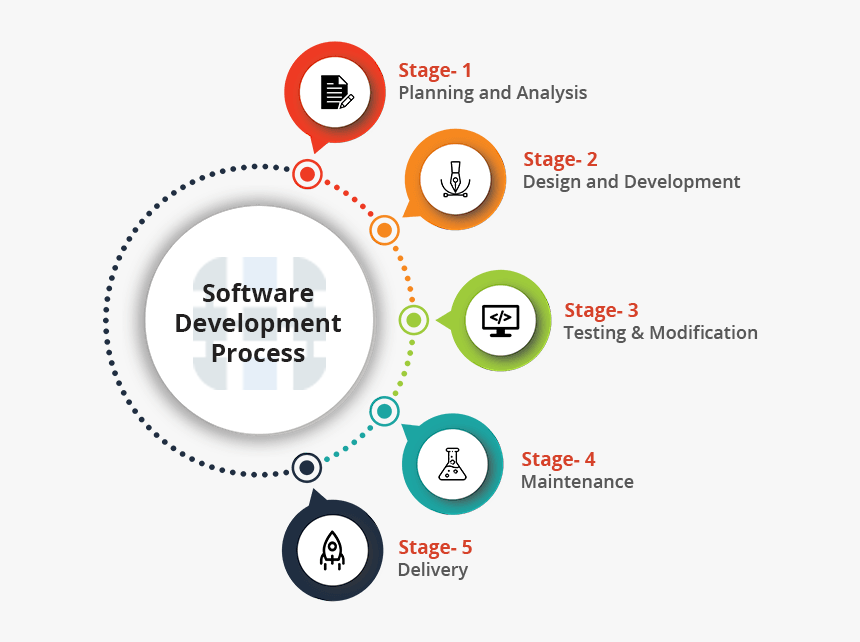 This case study is intended to serve as a study material for the course Technology of System Development for Software IT BSc students at the Faculty of Informatics, Unversity of Debrecen. The primary goal of the case study is to show the major steps of analysis and design activities of the software engineering lifecycle. The reader is expected to know the basics of the object-oriented (OO) paradigm and have some experience in programming in at least one OO language. However, the case study is intended to be independent of any concrete programming languages since it is out of the scope of this study material to deal with implementation details.

Knowledge about some guidelines, principles and patterns of software design might also be required. Students learn those pieces of background information in the prerequisite course.

Our running example will be a Book and DVD store. This example was chosen in order to be general enough for showing the most challenges that the specification and design of information systems have. The main purpose of the system is to allow the customers to browse and search products in an online warehouse, and they should also be able to place orders for those products. Detailed requirements will be discussed later, in the chapter entitled Requirements engineering.

The artifacts that are produced throughout the stages of development are documentations that are illustrated by models. Due to the rigid nature of some development documentations (i.e., requirements specification document or software design document) we will not include those documentations in their full details; instead, our focus is on the process of establishing the models describing the system of the case study. The models will predominantly be described using the Unified Modeling Language (UML) standard which is not only a de facto standard for describing models of software systems but has also become a de iure standard under reference numbers ISO/IEC 19505-1 and 19505-2. The current version of UML by the time of writing is 2.4.1 therefore we will use this version, however, version 2.5—which will have a major change in the organization of the specification—is under development.

This document is organized as follows. The rest of this chapter provides a very short overview of software process models and an outline of the UML 2.4.1 standard. Chapter 2 discusses the major issues of requirements engineering and provides a detailed view of the requirements of our case study. Chapter 3 introduces few high-level system modeling steps that will guide the reader to the architectural and detailed design covered in Chapter 4 and 5. The built-in extensibility mechanism of UML (called profiles) are detailed in Chapter 6 along with some examples of tailoring the design of the system to specific platforms. The last chapter is concerned with the emerging field of service-oriented architectures and discusses issues on how to expose system functionalities as services that can later be orchastrated into more complex services thus providing means of cross-organizational integration of software services.

The four fundamental activities of software engineering are:

These are those processes that you will inevitably meet regardless of which software process is applied in your project. Of course, these processes are complex processes: they include sub-processes or sub-activities like requirements management, architectural design, interface design, unit testing, acceptance testing, etc. Some supporting activities like configuration management or documantation is also needed when creating software.

A Software Requirements Specification document is an example of an artifact that is the result of the specification activity; programmer or project manager are examples of roles; while a precondition of integration testing might be that all the components that should be integrated are accessible and they are unit tested individually.

Software processes are complex and, like all intellectual and creative processes, rely on people making decisions and judgments. There is no silver bullet that means that there is not an ideal process of developing software. Processes vary based on their domain, application type, devloping organization, etc. Majority of organizations have developed their own software development processes that are standardized at an organizational level. Processes have evolved to get the best out of the people's capabilities within an organization and the specific characteristics of the systems to be developed.

Sommerville describes three categories of software process models (that can be, however, often used together). In fact, these are generic models that are not definitive descriptions of processes but are seen as abstractions. So you can think of them like software process frameworks that can and should be extended and/or adapted in order to create specific software engineering processes. These generic processes are:

The waterfall model is an example of a plan-driven process—in principle, you must plan and schedule all of the process activities before starting work on them. As it is seen on the figure, phases are cascaded from one phase to another, that is while it is known as the ‘waterfall model’. 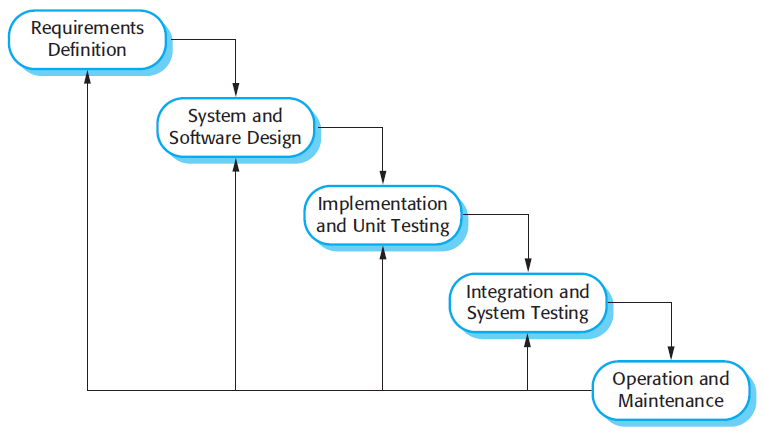 The principal stages of the waterfall model directly reflect the fundamental development activities:

At least in principle, the result (artifact) of each phase is one or more documents that should be approved and the subsequent phase should not be started until the previous phase has completely been finished. In practice, however, these stages overlap and feed information to each other. During design, problems with requirements can be identified, during coding some of the design problems can be found, etc. The software process therefore is not a simple linear model but involves feedback from one phase to another as it is depicted on the figure. Documents produced in each phase may then have to be modified to reflect the changes made.

In principle, the waterfall model should only be applied when requirements are well understood and unlikely to change radically during development as this model has a relatively rigid structure which makes it relatively hard to accomodate change when the process in underway.

Incremental development is based on the idea of developing an initial implementation, exposing this to user feedback and evolving it through several versions until an acceptable system has been developed. Activities of specification, development and validation are not separated but interleaved. There are also lots of feedback across those activities. 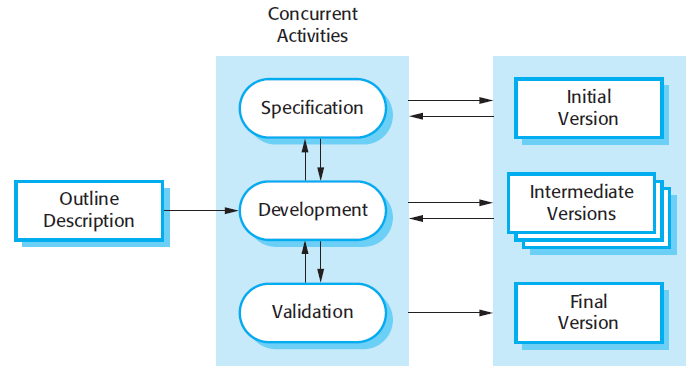 Incremental software development, which is a fundamental part of agile approaches, is better than a waterfall approach for most business, e-commerce, and personal systems. Incremental development reflects the way that we solve problems. We rarely work out a complete problem solution in advance but move toward a solution in a series of steps, backtracking when we realize that we have made a mistake. By developing the software incrementally, it is cheaper and easier to make changes in the software as it is being developed.

Each system increment captures a piece of the functionality that is needed by the customer. Generally, the early increments of the system should include the most important or most urgently required functionality. If this is the case then customers can evaluate the system at a relatively early stage in the development to see if it delivers what is required. If not, then only the current increment has to be changed and, possibly, new functionality defined for later increments. Compared to the waterfall model, incremental development has three important benefits:

Reuse is one of the most important concepts of today's software engineering since it can not only save a given amount of work when existing components providing a given funtionality are reused but existing components might have lots of testing received so far so we can possibly build more reliable systems based on them. Nowadays more and more software projects apply reuse to some extent, however, some of them relies more on reused components than others.

Reuse often happens in an informal way when people working on the project know of designs or code that are similar to what is required. They look for these, modify them as needed, and incorporate them into their system. This is basically the application of patterns in the development process.

A general process model for reuse-oriented software engineering is shown in the above figure. Although the initial requirements specification stage and the validation stage are comparable with other software processes, the intermediate stages in a reuse-oriented process are different. These stages are:

There are basically three types of software components that can be used in a reuse-oriented process:

One of the most important advabtage of reuse-oriented software engineering is the reduced amount of software to be developed and therefore reduced cost and risks. As a consequence, it can also lead to faster delivery. However, compromises must be achieved on requirements which might lead to a system that does not meet the real needs of users. Some control over the system evolution might also be lost as new versions of the reusable components are not under the control of the organization using them (no influence on what functionalities to include/exclude, etc.).

In this section some of the most important activities and sub-activities of the four general process activities will be discussed very briefly. For a more detailed description of activities, the reader should read some general software engineering textbooks like.

Software specification or requirements engineering is the process of understanding and defining what services are required from the system and identifying the constraints on the system’s operation and development. 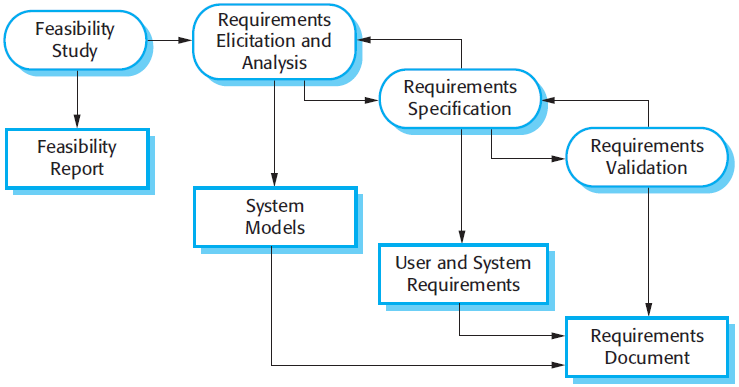 There are four main sub-activities in requirements engineering processes:

Of course, the activities in the requirements process are not necessarily executed in a strict sequence but the activities of analysis, definition, and specification can be interleaved. In agile methods, such as extreme programming, requirements are developed incrementally according to user priorities and the elicitation of requirements comes from users who are part of the development team.

The implementation phase is the process of converting a system specification into an executable system. It always involves processes of software design and programming but, if an incremental approach to development is used, may also involve refinement of the software specification. 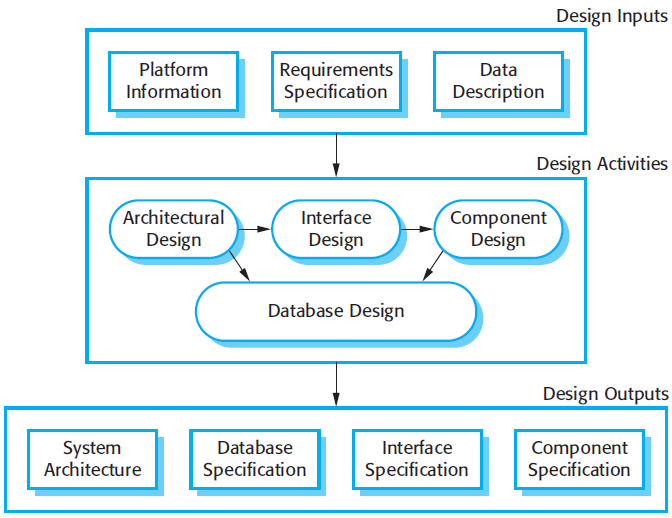 The activities needs to be carried out during the design process vary depending on the type of the system needs to be developed. However, for the development of information systems, the main four activities are the following:

Software validation or, more generally, verification and validation (V&V) is intended to show that a system both conforms to its specification and that it meets the real needs of the customer or user of the application. Testing, where the system is executed using simulated test data, is an important validation technique but some checking processes, such like inspections or reviews should also be applied during V&V processes.

Requirements are always changing, even after the system has been put into its operating environment. Emerging systems with new interfaces that our software needs to communicate with, or business environment changes might result in changing needs.