What is the term "takt time"? Origins of takt time? 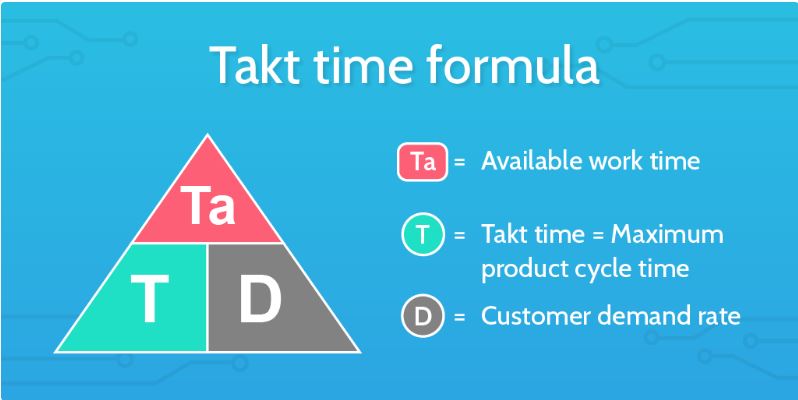 THE ETYMOLOGY OF TAKT TIME

The word Takt is of German origin and translates to rhythm, cadence, or cycle. As such, it was first used in reference to keeping time in music. A related word is Taktzeit, which translates to cycle time or interval. The word Zeit on its own translates to time, hence the common phrase in English of takt time.

The origins of takt time as a cornerstone of lean manufacturing is a fascinating story that can be traced back 100 years. There are two major parts to the story:

GERMANY: THE ORIGIN OF TAKT TIME

The Early Days of Takt Time

Hugo Junkers, a German industrialist and aircraft designer, experimented with various manufacturing techniques for his company’s aircraft production after World War I. As a predecessor to takt time, a pulsed assembly method was implemented by Junkers Aircraft Works. In this system, specialized teams synchronously moved between steps of manufacturing. The result? A finished plane every nine hours. This was revolutionary at the time.

Evolution at Junkers and Wider Adoption

In the early 1930s, Lufthansa requested further improvements to Junkers' flow system with increased production rates when placing an order request for Ju52 transportation aircraft, referring to it as the Taktsystem (timing system). As part of the Taktsystem, Junkers prescribed a uniform Taktdauer (cycle duration) for each major subassembly line. The Taktdauer could be adjusted as needed to align the production of subassemblies to demand.

During a visit to Junkers' Dessau facility in the late 1930s, Ernst Udet, the Luftwaffe Chief of Procurement, took note of the Taktsystem and standardized it for state-owned enterprises. Soon after, Henschel and Son used nine Takt stations at their Mittelfeld plant to pace the production of the Tiger I tank, with each Takt taking six hours (Hanby).

Theories of continuous flow, like many ideas, developed simultaneously and independently in different parts of the world. While Germany was implementing their Taktsystem, Ford Motor Company was developing a similar rhythmic, paced system halfway around the world at their Willow Run facility.

Charles Sorensen led the design of Ford’s Willow Run B-24 Liberator plant and implemented, among a host of other mass production techniques, a pacing clock with synchronized subassembly lines. Both of these were crucial in helping Ford achieve continuous flow and decrease production time from one aircraft per day to one aircraft per hour.

While takt time as a manufacturing concept did not yet exist outside of Germany, the B-24’s assembly takt time would have been an astonishing 63 minutes.

The story continues in Japan during the final years of World War II. Mitsubishi, looking to increase production output and improve their process controls, regularly invited engineers to lecture on advanced manufacturing techniques. One such group was a team of Junkers engineers, who came to Mitsubishi’s Nagoya plant to lecture on the “high-volume manufacture of fuselages and engines” (Herrigel and Zeitlin). On Mitsubishi’s adoption of the Junkers engineers' ideas, the following was noted in a 1943 newspaper editorial:“

The Mitsubishi Nagoya Works, known as the best aircraft manufacturer in Japan, implemented the zenshin-shiki method (‘Takt System’) last autumn, and the achievement was remarkable.

During the post-war period, Toyota was deeply interested in flow production and mass production. Notably, Toyota’s CEO Kiichiro Toyoda recruited design engineers from the aircraft industry to develop and build upon production techniques developed in that industry.

Meanwhile, Taiichi Ohno, often referred to as the father of the Toyota Production System (TPS), was passionately working on improving productivity and implementing flow production in Toyota’s machine shops. When, in 1950, Toyota implemented a five-year plan to “…modernize production control and facilities in order to double production without increasing employees, requiring the full-scale introduction of a flow assembly system,” Ohno was given the authority to implement product-focused flow production techniques more broadly throughout Toyota (Wada).

For a TPS definition of takt time, we turn to Taiichi Ohno himself, who wrote:

To prevent overproduction and make items as needed, one by one, we have to know when they are needed. Thus, the appropriate tact time becomes important. Tact is the length of time, in minutes and seconds, it takes to make one piece of the product. It must be calculated in reverse from the number of pieces to be produced. Tact is obtained by dividing the operable time per day by the required number per day (pieces).

Through his tireless championing of waste reduction and philosophy of only making what is needed, when it is needed, and in the amount needed, Taiichi Ohno disseminated the ideas of continuous flow and takt time throughout Toyota and its suppliers, where they strived to produce exactly to customer demand. As the waste-reduction principles of TPS were popularized though lean manufacturing, takt time grew in popularity and reached an even greater audience.

Many thanks to the following, whose work was referenced while writing this article: Michel Baudin, Alan Hanby, Gary Herrigel, Taiichi Ohno, Kazuo Wada, and Jonathan Zeitlin.